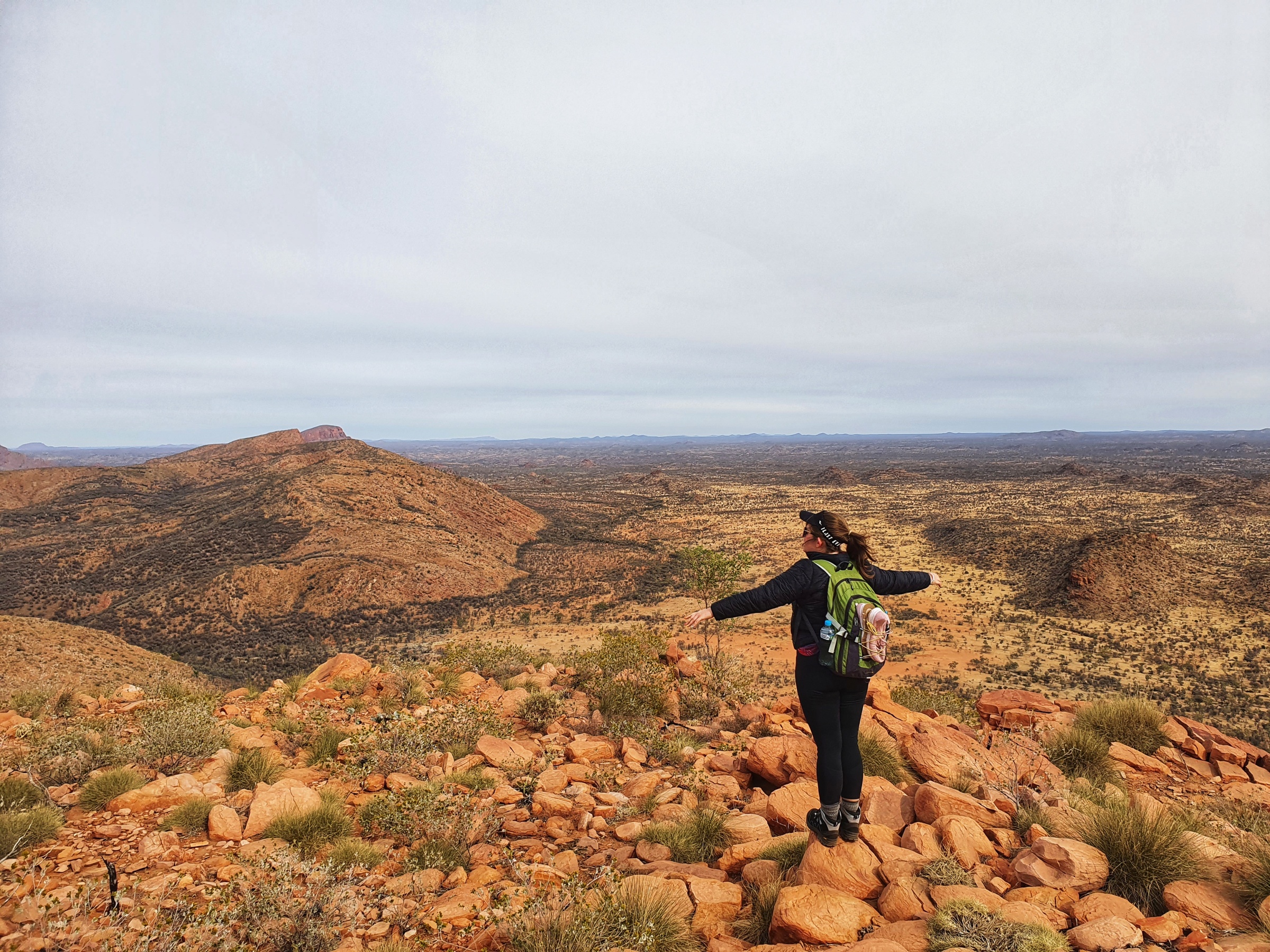 The wind had a bite to it.

It had kicked up the night before after we’d set up camp at the Trephina Gorge camp site and sent us in retreat to our tents for an abnormally early night, but I guess the copious amounts of wine and cheese also contributed to this. Nevertheless, we were committed to our mission. There are a number of short day hikes available at Trephina Gorge. Infact, we’d done the 2km Trephina Gorge Walk the evening before to admire the scenery. Today we were going to do the Ridgetop Walk and half of the Chain of Ponds Walk. A total of close to 19km. I wasn’t feeling fear exactly, but I was nervous.

It had been well over 2 years since I’d attempted a walk of this length, and I still wore the battle wounds of wearing in new hiking boots only a couple of days before at Standley Chasm. Despite packing a spare change of shoes into my day pack for if the pain became unbearable I had some serious concerns that I wouldn’t beable to make it to the end. I took a deep breath and resolved in my mind that even if it took me longer than my two camping buddies, I was going to make it, even if I had to wait a couple of hours at the official end of the hike for my friends to walk the 8 km back to the car and come pick me up.

I double checked my bag, heaved it onto my shoulders and together we set off.

The hike started with a steep incline up 3 mountains to get to the top of the ridge. As we started the incline at the mouth of the gorge I instantly felt the bite of my boots on the blisters on my heels. Gritting my teeth I pushed through the pain. Surely but steadily we continued up. Up over the first incline. Up and over the second incline before I was forced to stop. We had only been hiking for a round 2 hours but I could feel the blister bandaids I’d put on that morning being pulled down by my boots. Resting on a rock and snacking on second breakfast I examined the damage.

It wasn’t great. And you might want to skip the next paragraph if you’re a bit squeamish.

I’d put bandaids specifically designed for heel blisters on and then covered them in medical tape (I’ve no idea what it’s called). The tape had held but the bandaids not so much. As I peeled back the tape the bandaids came away, peeling the top layer of skin on my blisters away making my injuries much, much worse. I think the bandaids just couldn’t handle getting a bit sweaty. Thank God I’d brought more tape with me, along with a five pack of medium sized waterproof dressings. I layered two dressing onto each foot, saving one for emergencies, and covered them in tape before slipping my boots back on. I downed a couple of Panadols for good measure, finished second breakfast and set off once again.

Once we’d made it to the top of the ridge the track began to level out which made for easier walking, but the wind picked up making for a cold trek. After about 2.5 hours of walking in total we made it to the lookout. As far as lookouts go the view wasn’t jaw dropping but it was still pretty. It was interesting to see how the landscape changed over relatively short expanses. Towards the south we could see what we thought was our destination; a series of deep red rocks that looked like another section of Trephina Gorge.

The descent was pretty steep with a series of hairpin turns that took you right along the edge of the mountain which caused my friend with a fear of heights considerable stress. It was fascinating to see how the scenery had changed. We’d started the hike in spinafex country and progressed into small shrub country. Our descent ended in a riverbed where the Ridgetop Walk met the Chain of Ponds Walk. We lunched and made our plans. The original Ridgetop Walk combined with the Chain of Ponds Walk turning left for another 30 minutes until you arrived at the John Hayes Rockhole carpark. The other option was to turn right and add a couple more hours and kilometres to our day but would take us through a second gorge which promised some amazing views.

Really, it was a no brainer.

We set off towards the gorge. Unlike the main Trephina Gorge this one had a lot of large boulders throughout it creating pools of water and great opportunities for rock scrambling.

We climbed and explored our way through the twists and turns of the gorge. At times we were faced with pools of water that would require us to make the choice between swimming or climbing up and over in order to cross. Given the the fact that the wind was already quite cold while we were dry we chose the second option every time.

The walk officially ended at John Haye’s Rockhole at the front entrance to the gorge. All up, it had taken us about 5.5 hours. We rested awhile and enjoyed our second lunch, steeling ourselves for the 8 km walk back to camp. This part of the walk wasn’t particularly enjoyable. While some of the scenery was nice, we were forced to walk along a dirt road which was getting a lot of 4WD car use, meaning more often than not we were walking through clouds of dust.

The last 4 kms was the worst of my life. This is probably because I could see the escarpment signalling where our camp was and it didn’t seem to be getting any closer in a hurry. On top of this my feet were starting to ache all over from the long day.

Nevertheless, after almost 7 hours of walking from when we’d first set out, we finally made it back to the comfort of our car where the first thing I did was pull my boots off to relieve my aching feet and tuck into a bag of salt chips and a chocolate bar – my reward for completing an almost 20 kilometre trek.

I am honestly so proud of myself for doing this walk. I got to see places I’d never been before and discovered a new place for adventuring.

If you would like more information about this walk or the location, you can find it on the NT Government website here.