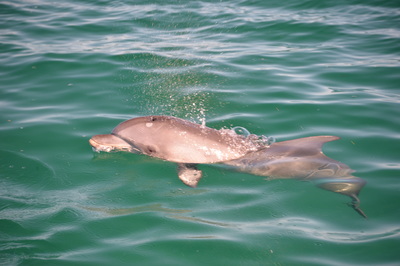 I know it’s girly, but swimming with dolphins has always been a bucket list item I’ve wanted to tick of my bucket list, and I FINALLY got to do it when I was in Adelaide last year. My only regret is that I didn’t have my own GoPro to capture any underwater photos.

I woke up early on Tuesday, I was feeling excited; today I was going to go swimming with dolphins – in the wild. I quietly got dressed and packed my bag with sunscreen, a towel, and our tickets careful not to make the floorboards creek, then went downstairs to make my breakfast and saw that my brother was already up and ready to go.

After we ate our breakfast, we drove to the Glenelg Marina where we joined the crowd of people waiting for the ‘Temptation,’ our boat, to arrive. Once the boat had arrived and docked, we boarded and were given wet suits and snorkelling gear. Once everyone had their wet suits on, we were instructed to take a seat so that the captain of the boat could see where he was going, and so one of the guys could run through safety details and give us our instructions.

After we received our instructions, I made my way to the back of the boat so that would hopefully be one of the first one’s in.  It wasn’t long after this that one of the lookouts saw the first pod of Dolphins and yelled: “swimmers ready! signalling for us to take a seat at the edge of the boat and grab hold of the rope. I’d been fine before that, but now I was feeling nervous. What if there were sharks in the water? I’ve seen in a documentary that dolphins don’t actually fight off sharks, that’s a myth. It was actually at this moment that I genuinely considered staying on the boat in safety.

Before I had time to let my nerves sink in, the lookout was yelling “swimmers in the water!” I slipped into the water and began shuffling down the rope.  My goggles filled up with water and I could taste it in my mouth.  I just finished fixing my goggles when the lookouts pointed to my right. I looked underwater and saw a pod of dolphins in the murky distance.

Over the course of the four hour tour, I got on and off of the boat about six times, and the only time I’d feel my nerves creeping up on me was when we would pass over dark patches in the ocean. My mind just kept thinking SHARK!

The only thing was that there were two ropes on the back of the boat to hang on to, and somehow, I always ended up on the rope opposite to where the dolphins were. So while it was exciting to see the dolphins, they were always murky and the best view I got of them was when I was on the boat. Despite this, I had a good time and I think I’ll do it again in the hopes I’ll get to see a dolphin clearly while I’m in the water.

This was such a fun bucket list item to check off. I can’t wait to see what other swimming adventures I can tick off my bucket list! 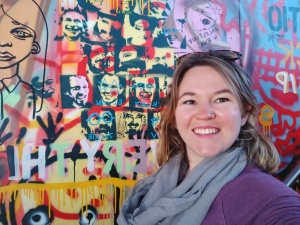